We have mild winters but it does get cold here. This is the Brickpit Ring Walk at Sydney Olympic Park.
I’m wearing Me-made knit top from my pre blogging days and mustard skinny jeans Vogue 2014. 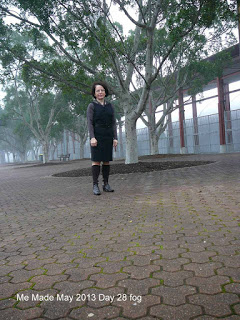 I made this little black dress Butterick 5314  when I was a larger size so I’ve used a belt.
The Jalie 2921 scarf top was made last year and I’ve crossed the scarf tie and knotted it behind my neck. I’m at Sydney Olympic Park again but it’s foggy. Who said Winter is coming?
These dark brown boots are all of $20 and it’s taken me a long time to wear them because they have lots of detailing but I’ll be wearing them a lot this winter.

This was the first pic I took so you could see how thick the fog was. That’s one of the light towers along the Olympic Boulevard (coming out of my head) and you can’t see the row of light towers behind it. That’s how foggy it was. 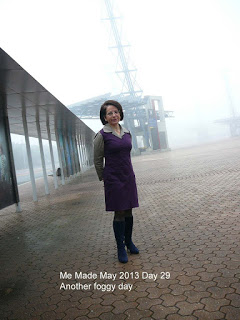 So the next day with lots more fog, I decided it was time to play with the exposure adjustments on my camera and this shows what I’m wearing better and you can still see how foggy it was.
This is a purple ponte dress Butterick 5676 I made last year and one of the first stretch woven shirts in taupe I made in my pre-blogging days. I love wearing my blue suede boots.
Two more MMM13 days to go…

Thank you for the comments on my hoodie. I’ll show you the smart casual version next and I’m working on a pair of longs for the gym. They won’t be as rad as Melissa’s but they’ll still fit well.

BTW, I only meant to tire myself out with the car tyre reference but I thought this did give you an idea of what we get up to at the gym in the morning. We’re a tight-knit group of crazies.

I love to sew anything and for Minerva makers, Prym consumer while producing Sew Organised Style podcast. View all posts by velosews

6 thoughts on “Almost there”