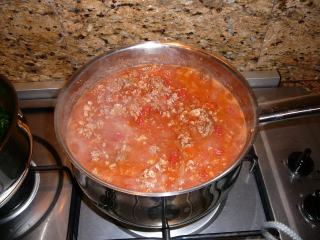 There are times when I get organised and cook ahead of time. Now these times can be rare at times, so while working on a new recipe, I threw together a quick mince sauce to be frozen for later.

This recipe is simple:
Chopped onions and crushed garlic are sauteed in some olive oil. Then I added the mince. In this instance it was a blend of pork and beef mince. Then I added in a tin of chopped tomatoes with some chopped fresh tomatoes. To allow the sauce to simmer, I put in 1 cup of chicken stock and pepper. Once the sauce has reduced, it cools and then is put into containers for freezing.