Pants, especially jeans, can ‘do your head in’ when you first start trying to make them. After sewing pants/jeans, the adjustments I make are always the same. Grab a cuppa and continue reading.

I’ve been watching Bootstrap Fashion very closely. When they first launched I wasn’t sure what they were about. Now I’ve seen how they’ve developed. Right now there’re looking for both ideas and funds to continue to grow.

Yuliya is very active on social media and she’ll answer anyone’s issues and questions. After a few online conversations, Yuliya asked if I was interested in making her Vado jeans. I was curious to see how a custom pattern could work for me with all my ‘lumps and bumps’.

While planning which Bootstrap jeans to make, I kept jumping back to Lara’s great post about Bootstrap Fashion and her first Vado jeans.

I chose the flare leg jeans and chose a slight flare so I didn’t look clownish. The finished jeans below look straight legged but that’s all the flare I wanted.

Lekala patterns and Bootstrap Fashion both use the same Leko software for their patterns, which allows you to order patterns customised to your measurements.  They both re-sell Russian Leko patterns, which is why you will find some of the same patterns on both websites. The kicker for Bootstrap Fashion is they also sell patterns from other designers, and have a design centre feature where you can design your own dress pattern. 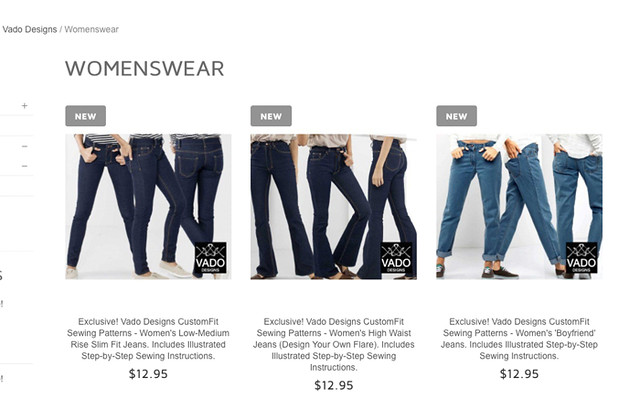 Bootstrap Fashion are currently crowdfunding through Indigogo to continue to improve their website and software offerings to act as a central source of customised fashion designs. They’ve already raised enough funds to add two more libraries –  tops and pants.

I’ve bought Lekala patterns before so it was easy to agree to try out Yuliya’s vado jeans.
This time I chose A0 version patterns because I really, really wanted to try this jeans pattern and avoid piecing A4 pieces of paper together. Cutting out this pattern once saved time #happy.

My jeans fabric has minimal stretch and was purchased in Melbourne last year.

The pocket bag is the same as my RTW jeans which impressed me. 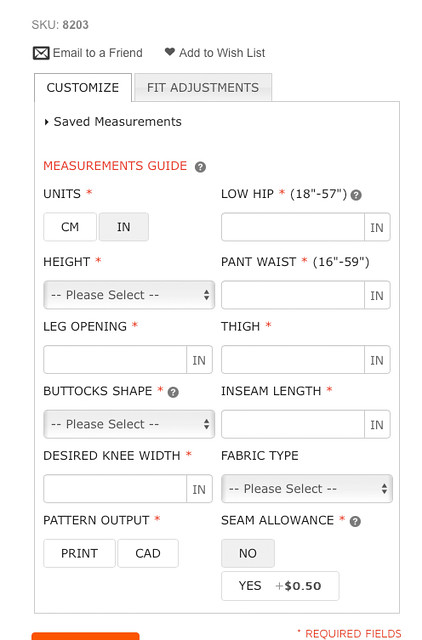 My first few attempts at entering my measurements were odd. By the time I was ready to enter my real measurements (I’m 4kg over my normal weight) I could see there was a calculation bug on the system.

Let me tell you, Yuliya was onto it super fast. Yuliya receives hundreds of emails daily but she’s got her eye on every order and acts real quick to rectify it. She contacts you directly. There was no special flag on my jeans order and I’ve seen how responsive she it to others.

Yuliya is on every online sewing discussion thread I follow and she lets people know a) when there’s an error, b) how long it’ll take to fix, c) that the system is now fixed. She thanks people for their ideas and questions.

Yuliya takes all issues and criticism about Bootstrap fashion into account and fixes things. She doesn’t vet anyone out.

So what was I saying?
I read Lara’s review and Beth’s review about their Bootstrap Fashions jeans experience.
By the time I printed out my pattern, a very comprehensive set of jeans constructions were emailed to me.
There aren’t heaps of notches on the patterns but they’re in the right place to guide your sewing.

Long story short, my husband doesn’t like high-waist jeans on me. I don’t consult with him on fashion but I also felt these are very high-rise for a short person like me. I was kidding myself about this style.

Pattern adjustments:
You guessed it. I’ve since taken 6cm out of the body of the jeans so the pattern matches my RTW mid-waist jeans. I still like this pattern because it’s the most RTW jeans pattern I’ve seen.

I’ll be making another pair soon and I have a few more Bootstrap patterns to try so it’s onwards and upwards for me;)

Post script:
If you want to check out the jeans I’ve made so far, in 2011 I made my first low rise Jalie jeans 2908. That was after making my first woven jeans using Vogue 1204. Both patterns have been reused a few times now. Last year I made super comfy Sew Liberated skinny jeans. Once I get a pattern to fit, they definitely get reused.