The ‘thing’ with fantasy shows is the costume department use loads of texture techniques to create a mood for each character.

Dragonscale embellishments are used in Game of Thrones to create Daenerys Targerean or Khaleesi’s regalness as she becomes a queen while being the mother of dragons. So that’s where I headed for my round 2 ‘make your own fabric’ challenge in PR sewing bee.

I was fearful of making something that would look ‘undercooked’, however online costumers are generous in sharing their costume techniques.

Smocking
Smocking is something I’ve enjoyed dabbling in. North American smocking is used to create some of the embellishments for Khaleesi’s costumes and I saw one of her costumes up close at the Game of Thrones exhibit in Belfast last year. The same technique is used on her later costumes too.

The smocking template is fairly simple to mark up on fabric and there are lots of YouTube demos to learn from.

After creating a small sample in front of the telly, I realised this smocking gig is worthwhile doing.

The cotton under layer fabric was sewn as per the pattern with the darts sewn. Then the smocked piece was over laid on it.

Here’s how the bodice came out with additional fabric sewn onto the shoulder pieces. The bronze sequins are also provide more ‘scale’.

The local fabric store had this royal blue fabric I needed for this piece and I had plenty of stray threads in my stash to machine sew lots of scales and quilting lines on each panel piece.

The costume has quilt lines that look very military. But then another version has a honeycomb mesh fabric on it so I had to decide if it was work adding dragon scale mesh to the skirt.

I ended up using the blue mesh fabric on the skirt over the quilting lines and fabric piecing.

On the actual outfit, there’s a gorgeous open back to it.
I went for the bra friendly version – small. 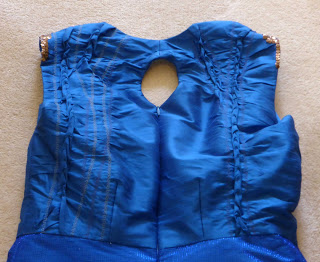 Vogue 8280
Vogue 8280 was my Khaleesi costume basis and initially cut the lining using a scale like Ikea fabric. 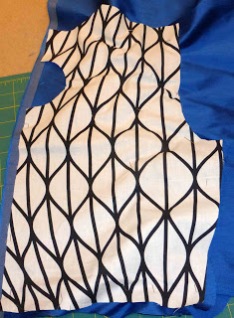 This fashion fabric became the outside and lining for the costume. 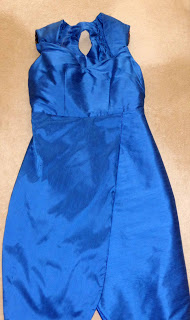 This costume is quite heavy and fits firmly. 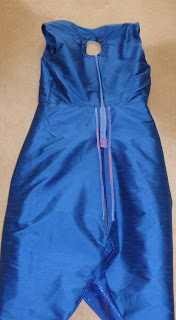 By texturing each piece of fabric, one at a time and checking the photos of the original work online, I felt a whole lot more confidence in creating the textures without feeling all this work would be wasted. I think I spent 12 hours on this project. 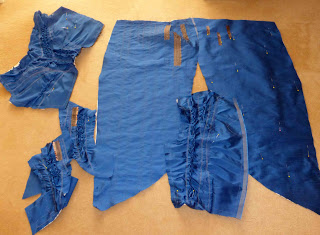 The mother of dragons has done well to survive through to series 5, so why not make one simple Khaleesi outfit for myself.

With trousers.
And that’s my fantasy piece for now…