Here’s the RTW cycling jersey I wear which has a faux reflective zipper.

After closer inspection it is a sports zipper with reflective tape sewn on it. So I created my own reflective zipper. 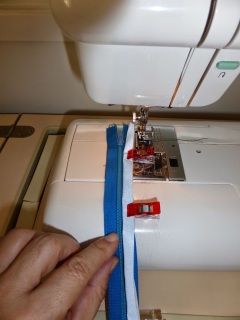 I used Clover wonder clips to hold the tape to the zipper tape.

You can see how much reflective tape I have to play with.

Here’s the finished DIY reflective zipper.
It took a few goes to sew the zipper onto this knit fabric but I got the hang of it by sewing slowly and resewing some parts just to get it to sit properly.

Lesson learnt:
Use glue if you need to hold the knit fabric in place when pins won’t pierce through the layers of tape, zipper and knit fabric.
Reflective piping:
Preparing piping is easy enough. The piping filling I’ve used is acrylic wool from a failed learning to knit attempt #idon’tknit. 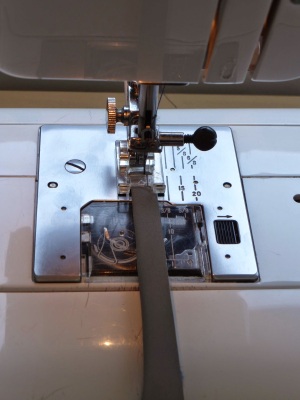 On my Surf to Summit cycling jersey using Funki Fabrics, the plan was to use reflective piping
My guestimate was I would need 4m of reflective piping. Once I finished the new cycling jersey (using blue Stormset fabric) I had reflective piping left over so I was glad I only had to sew the piping once.
Initially I sewed the piping on with a straight stitch. Not bad. Then I decided to use the overlocker. I wasn’t very accurate and the piping stitching was visible so in the end I sewed the seams with a straight stitch and then used the overlocker to finish the seams.
Lesson learnt:
Run the piping into the seam so you don’t have a layer of piping at a seam join. This simply makes seam allowance joins easier to work with.
Last year Susan from Measure twice cut once also gave me some reflective tape samples to use which I still have to test. The samples she’s given me is high quality so I need a good project to use them on #preciousstuff.