This has been the ‘pants’ year as I’ve worked on a couple of pants patterns so I had better skills to make jeans.

Mushy made this pattern and I loved it because of the straight leg design and the pattern is designed for woven fabrics and not stretch woven fabrics.  These pants are described as “fitted, below waistline pants has front side slant pockets, back patch pockets, fly zipper closing, back yoke, waistband, carriers and topstitch trim“. Here’s knottygnomeknit’s version in denim.

The front pants have been shortened so the jeans finish closer to my hips than right on my waist. I’ve also raised the pockets because not only were they long, but they were deep. 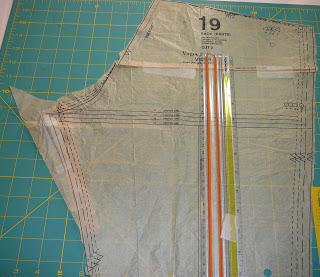 The inner back seam has been increased by 2 cm and the curve is also deeper. The waist has also been lowered for the next pair of jeans. Below is my version of making the leg width less full. I was going for a more straighter leg version.

Now that I’ve finished these pants, I think I’ve effectively sewn this pair, at least twice. At least the amount of unpicked thread on my floor indicated these needed lots of tweaking. I’m not normally this particular but I really wanted these pants to look good and not home made.

When I wore these for a day, I realised that I needed to resew the belt loops onto the waist band. They were way too long at 9.5cm long. I cut them back to 7.5 cm.
I also saw how long the pocket bag showed under the pants so they are now 6cm deep as opposed to 15 cm deep.

I had lots of fun adding the rivets and jeans button. Using a hammer is definitely my thing.

I’ve also added more room for my thighs so hopefully the bagging around my butt will disappear (he he). The next pair will be green and should sit closer to my hips. I do prefer low rise jeans.

The top is Kwik Sew 3378. This top has recently been adjusted. I’ve taken 4cm out from the centre back seam.

Sharon suggested using one machine for top stitching, a second machine for normal sewing and the overlocker. So that’s what I did and I was able to progress through the pattern instructions much easier, without needing to thread and rethread the sewing machine with each step.

While writing up this review I found an blog about how RTW jeans either emphasis the butt as either a one mound or two mounds. I definitely have a two mound butt.